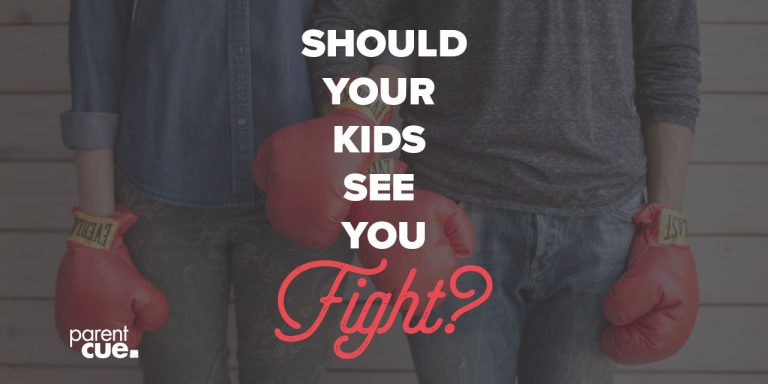 You may have already weighed in on the age-old parenting debate: should you let your kids see you fight?

Clearly, the question springs out of the pain too many kids grew up witnessing. For sure, there are some things kids should never witness. And while God can use anything for good (and he does), I’m still not sure it’s great parenting to introduce kids to the depths of human depravity.

As a result, some couples move in the entirely opposite direction: they don’t want their kids to witness any kind of conflict. But not everyone’s sure that’s the answer either. After all, how are your kids going to learn to resolve conflict in a healthy way if they never see conflict?

Most of the fighting in families happens for the opposite reason: families spend their energy fighting with each other.

You know the drill. A world war is sparked over everything from who on earth left a wet towel on the wood floor, to how many videos games you son is allowed to play, to why your daughter can’t go to the sleepover.

My wife and I learned how to fight with each other long before we figured out how to fight for each other and for our kids. Fighting with someone is just so much easier and more natural. And deeply destructive.

So what’s the difference between fighting for and fighting with the people you love?

All you do is swap out one little word, but it makes a difference that is staggering:

When I fight with someone, I want to win.

When I fight for someone, I want them to win.

And what does it look like when you want your spouse and your kids to win? It means . . .

searching for solutions even when you can’t think of any.
giving someone the benefit of the doubt.
filling the gaps in information with trust, not suspicion.
deciding you’re going to stay when everything in you wants to leave.
getting the help you need to deal with your junk, not their junk.
loving each other because you realize love is a decision, not an emotion.
letting your kids see you’re committed to your spouse.

When you let your kids see you fight for each other and for them, it shows them how much they’re worth.

One of the reasons most of us struggle with fighting for each other is that we’re not sure anyone has ever fought for us.

The reality is that someone did . . . for each one of us, when we deserved it the least. Jesus was fighting for us when He became human and walked this earth when He was beaten, nailed to the cross, and forsaken. Jesus demonstrated perfectly what fighting for someone looks like when he gave His life for us . . . so that we could have life.

Fighting for someone and wanting them to win requires humility and sacrifice, but it’s how you prove you love them.