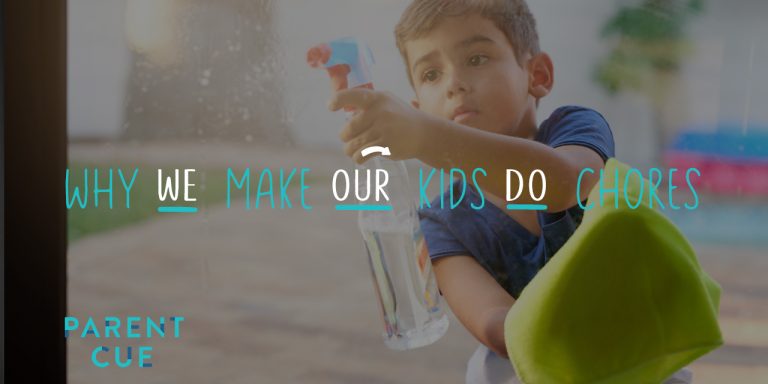 I’ve never been a big fan of January 1st. Too much pressure to set a goal or make a resolution, and then an impossibly long 12 months to keep it. But the start of the school year? I love it. Maybe it’s the smell and look and feel of new school supplies, maybe it’s the enthusiastic outfit choosing, and hair gelling and homework doing, that makes me giddy. Or maybe it’s the hope that if you set some optimistic goals in August and September, being able to keep them until Christmas break seems a lot more doable.

My kids recently started school, and the weekend before we pushed those little bottoms out the door, we did some life overhaul. We bought the school supplies—the tuck box crayons, the pencil top erasers, the Clorox wipes, the pencil grips. We cleaned out the closets, we straightened up rooms, and we stocked up on snacks and pulled our book bags and lunch boxes out from under a fine layer of dust. And then we got the chore chart back out. Because it wouldn’t be a fresh start if we didn’t include reinstating some child labor around the house.

The chore chart is an ever-evolving thing in our family, depending on the boys’ ages, and the season of life we are in. There are things that they are asked to do because they are a part of the family: like take their dirty plates to kitchen following each meal, bringing their book bags and lunches in from school and putting away the ice packs, taking stuff on the stairs up to their rooms and then put away, getting drinks and silverware for the family, making their own breakfast.)

And then there are the chores that earn the boys a star, and then a certain number of stars earns them a dollar. These include loading and unloading the dishwasher, making their own lunches and water bottles for school, folding and putting away their clothes, making their beds, cleaning their rooms, and getting the clothes off the bathroom floor—without being asked.

The good news is, my boys are obsessed with Legos. There is a strong incentive to do the chores to get the stars to earn the money to purchase the Legos. The bad news is, they’re five and seven, so motivation can still be hard to come by.

But there are a couple of reasons we keep pushing to make the chore chart a regular part of our lives anyway. For one, I am looking for any reason to get school lunch making OFF MY PLATE FOREVER. Sorry kids, but I’ve earned my right to pawn off unwanted responsibilities to you. I do it all in love, of course.

But the other reason is because of a big word that tends to get a bad rap these days, responsibility.

I want to teach my kids responsibility. And not because with it comes the appreciation of hard work, and small doses of the real world waiting for them outside our walls, or because I plan on raising self-sufficient and independent men. These are all great, but they are not the biggest objective I have.

I want to teach them responsibility because I want them to learn early and to learn often how capable they are of so much.

I want to be able to watch them push through a task and meet their surprised eyes at the end and tell them I knew they could do it and how impressed I am.

I want to watch their life skills develop so they grow up believing almost anything is achievable with some practice and persistence, even if it is unfamiliar and new.

I want to watch them do these things at home while they still have a cheerleader in me, encouraging them and pushing them, because no one else in the world besides their mother is going to cheer for them for folding their socks.

I want them to develop habits now because I want them to know they are more capable than they think they are, they are more skillful than they imagined themselves to be, that they are growing into men—and I see it, but appropriate responsibility now let’s them catch glimpses of the great wide expanse of a future before them—one that is theirs for the taking.

Yes, as parents, we just want our kids to lend a hand, because our lives are busy and if someone besides you could learn to load the plates facing the right direction in the dishwasher, the world would be better for it.

But when it comes to responsibility there is so much more on the line than our OCD for dishwasher loading. Who our kids believe they can be, who our kids see us believe them to be. Horizons are waiting to be explored. And telling our kids that responsibility is the key to reaching them may sound like a big sell, but believe me. Responsibility is so much more about them, than it is about us. About so much more than work. It’s about learning in our homes what their growing minds and bodies and spirits are capable of when we push them and challenge them and teach them.

I have a feeling we’ll start strong with the chore chart and then come late September it will be neglected a bit. Then maybe picked back up in spurts, or whenever there is a Lego set being eyed.

But the chart will stay hanging on the refrigerator door, warped from water drips missing the water bottles being filled, wrinkled from growing legs brushing past it in a rush to pack a snack, smudged from fingers opening and closing the freezer to get their ice packs. It will stay hanging up, because while they may not see it this way, I see that chart as being just as important and just as meaningful as the character awards hanging above it and the Bible verses stuck up beside it. They are the gateway to a future as big and expansive and inviting as my boys make it to be. That is theirs for the taking. That day in and day out, in the little jobs and the menial tasks, they are learning to believe is more attainable than they ever thought.